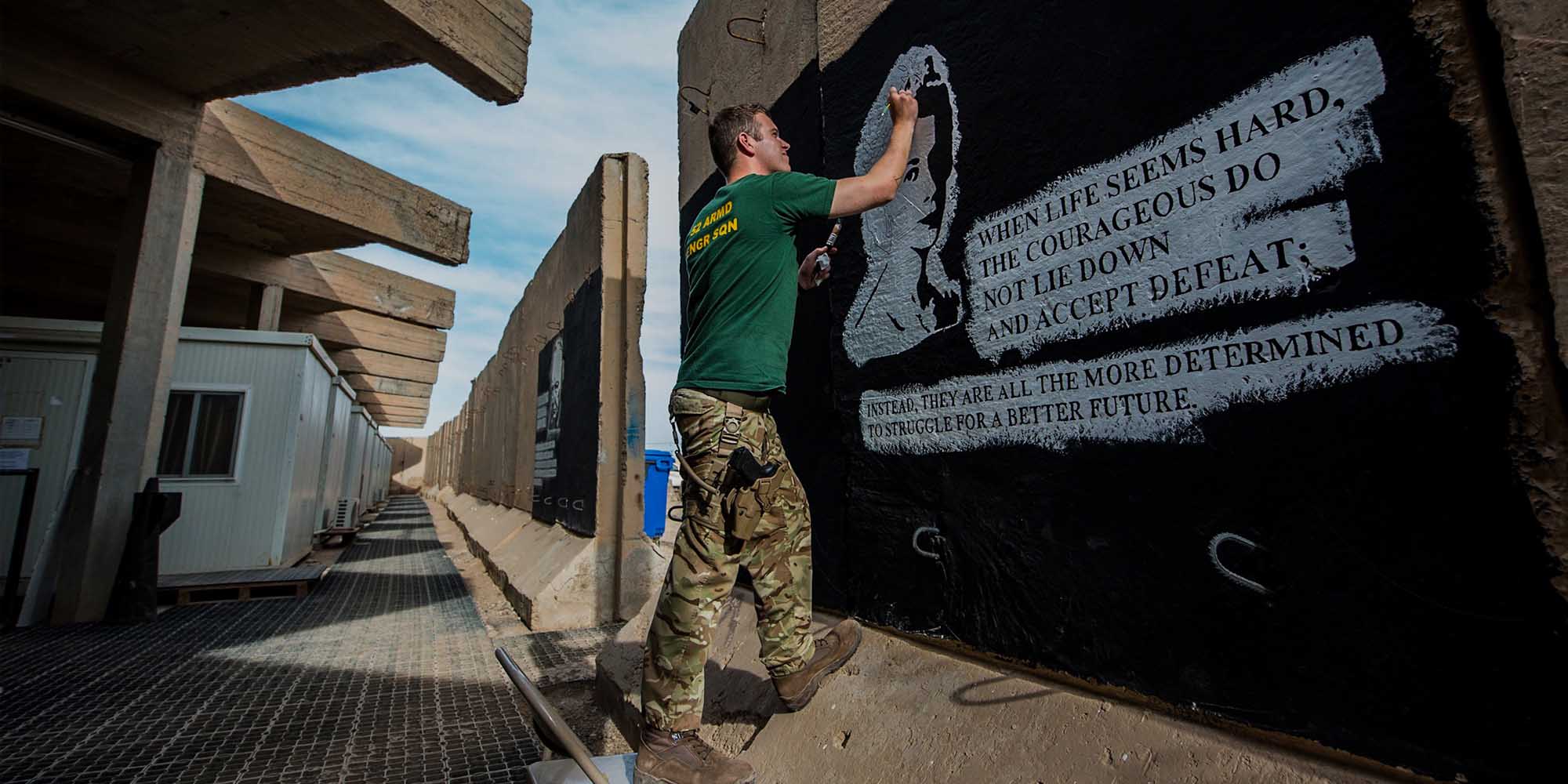 Winners are set to receive almost £4,000 in prizes

We are extremely proud to announce the winners of our photography competition for the Armed Forces community including Civilian Contractors and the wider Military family. Seven winners including one overall winner have been selected from over 100 eligible entry photographs spanning two RAF helicopters reflected in the waters of the River Ouse as they fly over on a training mission, framed by early autumnal woodland and a moody sky, and the close up of a Labrador puppy looking straight to camera, sporting a Remembrance Day poppy with Military boots just out of focus in the background.

Talking about the moment depicted in the image, Nick comments,
“Inspired by a painting of Winston Churchill already present in the barracks when we arrived, Adam Williams took to creating an image of the Queen on the opposite wall to add to our patriotic picture gallery. Military camps in Iraq don’t tend to be the most homely places, so I wanted to mark Adam adding a much-needed dose of colour and creativity to our living quarters. The picture was taken on my Nikon D800 using Nikon 14-24 mm F/2.8 lenses.”
As overall prize winner Nick will receive £750 of photography vouchers from Forces Mutual.

The judging panel which included representatives from Forces Mutual, our parent Police Mutual Group, Amateur Photographer magazine, and BFBS were stunned by the quantity and creativity of images received. Panel judge Mike Laird, a former Afghanistan photographer embedded with the International Security Assistance Force (ISAF) and photography lecturer commented,
“These images tell the unseen stories of Military lives, distilled down into single moments. They are fantastic, especially for amateurs.”

The judges were unanimous in their selection of the overall winning image, impressed by the juxtaposition of the informality of street art with the regal splendour of a royal portrait, all within the stark and dusty confines of a Military camp in Iraq. Mike Crofts, Head of Military Relationships, Forces Mutual commented,
“For me Nick Johns was the clear winner because what he has captured is truly a genuine moment that would never have been seen by the wider world if not for this competition. Thanks to the wealth of fantastic photographs received we have created a limited edition 2017 Genuine Moments photographic calendar to show off more images than we were able to honour through the competition.”

Winners of the additional Genuine Moments categories were:

We designed the Genuine Moments photography competition to revolutionise the images of the Military that the public are exposed to – less parades, prestigious functions and ‘boots on tarmac’ - and show more intimate insights into the lives of the people who put their lives on the line every day, focusing on the stories of individuals and their relationships with everyone from children to colleagues and the family pet.

Visit our gallery of winners to view the Genuine Moments photo gallery which showcases all the winners and a selection of other entries.

Top fitness tips and advice for families in 2017

Making a Difference to Police and Military Lives